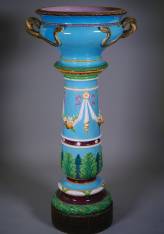 Minton manufacture, England, enamelled ceramic snake basin, circa 1852
Influenced by the movement of returning to the styles of the past that characterized the second half of the 19th century, the Minton factory began to draw inspiration from the Renaissance. The works of Della Robia and Bernard Palissy represented a great source of inspiration which is perceptible in the choice of colored enamels and the presence of snakes coiled around the belly. But the pieces from the Minton factory are exceptional for their decorative qualities as well as the simplicity of the decorative repertoire which testifies to the ability of artisans to synthesize styles to please their clientele of connoisseurs, not only English but also foreign.