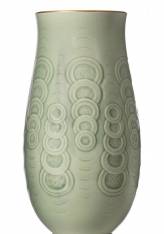 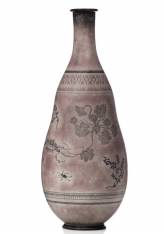 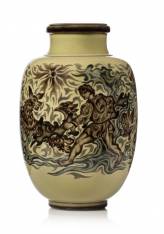 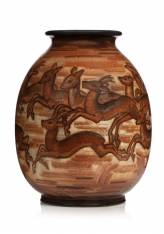 In 1740, the Manufacture de Vincennes was founded, thanks to the support of Louis XV and Madame de Pompadour, to compete with the productions of Chantilly and Meissen. In 1756, the factory was transferred to Sèvres in a building built on the initiative of Madame de Pompadour, near her Bellevue castle.

It was built between 1753 and 1756 by the architect Lindet on the site of the farm known as "de la Guyarde", and was 130 meters long and four stories high. On either side of the central pavilion, surmounted, on the attic floor, by a pediment without sculpture bearing the clock of the former Royal Glassworks, the building develops over two long wings terminated, at both ends, by corner pavilions. The central pavilion is preceded by a courtyard called the public courtyard, closed by a wrought iron gate. In front of the factory is a half-moon to allow the parking of the visitors' carriages.

On the first floor, the building contained the land reserves, the pyre and the raw material depots. The second floor housed the molding, plastering, carving and engraving workshops as well as the kilns. On the second floor were the sculptors, turners, repairers and upholsterers. Finally, the floor under the roof housed the painters, gilders, animaliers and figurists.

The factory became part of the Crown in 1759.