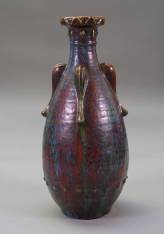 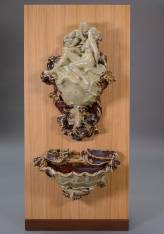 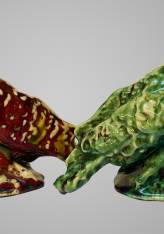 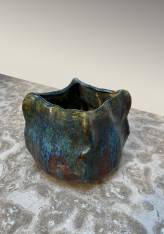 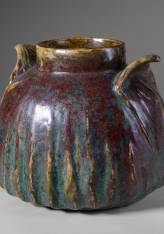 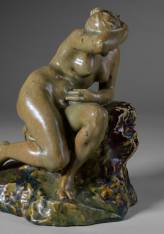 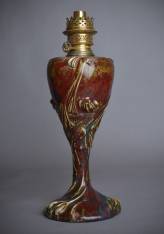 Pierre-Adrien Dalpayrat attended the drawing school and then the practical school of painting on porcelain in Limoges from 1859.

After this training, he joined the Jules Vieillard et Cie earthenware factory in Bordeaux, where he married Marie Tallerie on May 17, 1866. In 1873, he left this factory to return to Limoges where he was hired by Léon Sazerat (1831-1891). In 1874, he went back on the road and worked at the Ashwin earthenware factory in Valentine.

After the earthquake of 1887 which destroyed their workshop, he returned to Léon Sazerat in Limoges. In 1889, he opened his own earthenware factory in Bourg-la-Reine. He first settled at Nos. 5 and 7 Grande-Rue (now Nos. 31 and 33 Avenue du Général-Leclerc), where the factory of Jules Edouard and Ernest-Louis Carron was also located, then they annexed No. 9. It seems that he also lived at no. 22 Grande-Rue and moved in 1895 to no. 19.

Around 1889, he used the kiln of Jean-Charles Auboin (1731-1809) and his sons, other famous Bourg-la-Reine earthenware makers, also located at nos. 31 and 33, and who worked with Pardoux, another Bourg-la-Reine ceramist, famous for his flamed, variegated stoneware. He employed his wife, Marie Tallerse, and their children Albert, Adolphe, Hippolyte and Paul.

He acquired a mastery of stoneware work and gave his name to the "Dalpayrat red". This shade made his international reputation. He obtained it by using copper oxide and by controlling the atmosphere, the duration of the firing, as well as the temperature to obtain original effects of a red oxblood hue. In 1892, he signed a first collaboration contract with the sculptor Alphonse Voisin-Delacroix (1857-1893) and a second one providing for a reciprocal exclusivity for twelve years. He had a great success at the exhibition of his works at the Georges Petit gallery. In 1893, he met the Swedish artist Agnès de Frumerie (1896-1937) with whom he collaborated for some time, but their differences of character put a quick end to this collaboration.

That same year, he participated in the 1893 World's Fair in Chicago. The collaboration with Voisin-Delacroix will stop abruptly following the death of the sculptor, April 2, 1893. He then associated himself until 1901 with Adèle Lesbros, who provided him with financial support. Also collaborating with Jean Coulon from 1894, he had great success with his flamed stoneware stamped "à la Grenade". In spite of this, his company experienced recurrent financial difficulties, which forced him to direct his production towards more classical earthenware. On April 16, 1898, he married his daughter, Julie to Paul Martial Dalpayrat, a cousin mirror maker, at the town hall of Bourg-la-Reine.

He received a gold medal at the Universal Exhibition of 1900, as well as the insignia of Knight of the Legion of Honor. He enlisted the help of two great goldsmiths, the Parisian jewelers Ernest Cardeilhac and Keller, with whom he produced pieces mounted in gilded bronze. In spite of this, the company continued to experience difficulties and had to close in 1906. Pierre-Adrien Dalpayrat then retired to his native town where he died on August 10, 1910.