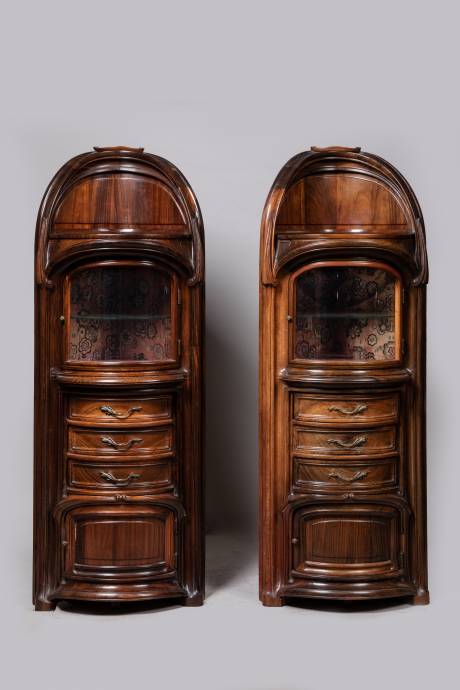 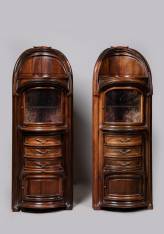 Padouk wood, or sandalwood, molded and carved in a quarter circle. The cabinet opens in the upper part by a curved glass door that reveals a glass shelf and three drawers. In the lower part, a door reveals a white marble bottom. Its top is topped by a pediment ending with scrolls forming a niche. The two front feet are subtly moved.
Handles of the drawers "reeds" and door knobs in gilded brass.

Among the great patrons of the Art Nouveau period, Jean-Baptiste Eugène Corbin is a paragon. Having made a fortune with his chain of department stores, he employed the most famous figures of the Nancy School, including Majorelle, Daum and Prouvé. In 1903, his brother-in-law and associate Charles Masson called upon Eugène Vallin, assisted by Victor Prouvé, to create an exceptional dining room that is now on display in the École de Nancy Museum, formerly the Corbin House. A year later, in February 1904, at the time of the marriage of his daughter Renée Masson (Nancy, 1885 - Neuilly-sur-Seine, 1968) to the lawyer and manager of the "magasins réunis" Pierre Bachelard (Sarreguemines, 1877-1970), Vallin was commissioned to design a dining room and a bedroom for the apartment that the young couple occupied at 8, rue Mazagran in Nancy. The artist's watercolor drawings reveal the importance of this commission, and the dining room was presented at the Nancy Decorative Arts Exhibition in October of the same year.

After the Masson-Bachelard couple left Nancy, the bed, the armoire, the dressing table and this pair of bedside cabinets were sold to a certain Alphonse Gaudin, 97 rue Charles III in Nancy. The furniture was then sold at auction at the Hôtel des Ventes on Rue du Sergent Blandan in Nancy, in 1956 (according to Charpentier) or in the early 1960s (according to the buyers). It was a couple of Nancy academics who bought the bedside tables: Pierre Danchin, professor of English, future president of the University of Nancy II and his wife Georgette, mother of a large family. Their children remember with precision the arrival of the bedside cabinets at their home in the early 1960s. The bed and the wardrobe were sold again at auction on March 25, 1982. The Musée d'Orsay made no mistake and acquired the Bachelard-Masson bed (OAO 710) and its armoire (OAO 711), which are on display in room 64 of the museum.

The beauty of this figurative room is due to the use of a particularly precious exotic wood: padouk. Our bedside tables, with their unusual dimensions, illustrate Eugene Vallin's "expressive" period. The artist simplified his lines and turned to stylization. On our furniture, the "Vallin sheath", one of the great constants of his art, connects the pediment and the glass door. It is the scene of a play of lines where one imagines the plant motif in its molded volutes (Descouturelle, image n°28, p. 97). The bed and the rest of the furniture in this room are much more than instruments of rest. As Frédéric Descouturelle writes in his monograph on the artist, they are "a formidable vessel sailing on the sea of dreams.