Discovery of a Luba icon 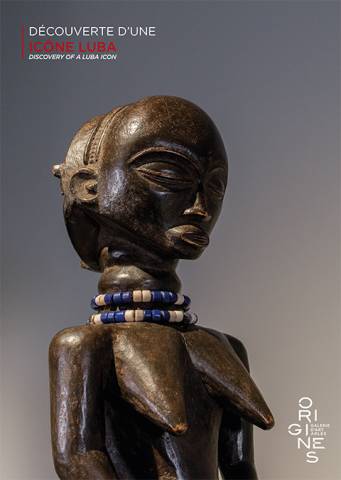 Hughes Dubois is a photographer at heart who has made a name for himself shooting statuettes, usually non-European.

He lives most of his time between Paris, Brussels and elsewhere. Because the greatest museums of ethnic arts require him to photograph their treasures.

So far, nothing to do, strictly speaking, with contemporary art itself. That said, at first glance, and probably a bit hastily. Because, when I don't know which photographer sets out, nowadays, to reproduce the pictures of Carl Evans' first masks, one says that he makes contemporary work and one promotes him as such.

A very contemporary photographer, shooting effigies with a new life, Dubois is no longer an ethnologist concerned with preserving an object that is in danger of disappearing.

It is necessary to look at his works to understand that this approach is not only original, but unique and important. It is not a work of observation but a quest for expression.

It is the culmination of an approach initiated in 1990 with his "Portraits of Songye Figures" which sums up more than thirty-five years of assiduous, complicit and personal quest: "to give life, to give a humanity to these sculptures of bygone times".

In the manner of a Soulages in love with luminous blacks, Dubois expresses the light that emerges from the depth of time. Because Dubois, in his quest, testifies, as Soulages with his blacks, of a dialogue between his models and him. It is also a fight with the matter put in naked.

Dubois expresses it very well: "The light makes it possible to connect the volume to the light. The lighting is essential, as in a Bob Wilson piece. In the case of the statuary, it brings a reading of the relief, far from being uniform.

By tackling, as a contemporary photographer, the sculptures, Dubois pays homage to the cult of the ancestors, and realizes the highlighting of a common memory. 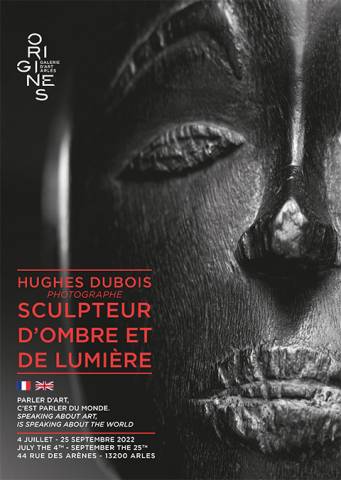 Since its appearance on earth, life has depended on a very fragile balance between resources, between species. When one species takes itself for the most important, the whole balance wavers.

It is to testify to this, by crossing artistic gestures, materials and views, that Richard Vinatier has asked Chantal Porras to present her work.

The gallery will present a bestiary in bronze of African animals endangered by human activity, in the very cradle of our Humanity, where it originated. The purity of the lines of the works of Chantal Porras, the softness of its curves, its patinas, pure, intense and luminous will dialogue with the pieces of tribal art.

The sensuality of the sculptures attests to a skillfully mastered craft, a look full of sensuality, a sagacious vision. Definitely, Man and the World are witnessed together, in the work of this artist. 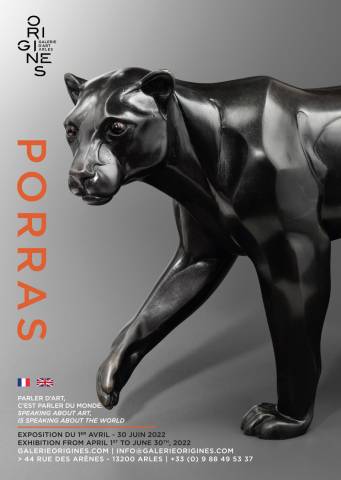 Contemporary sculptor Darbaud was born in 1943 in Aix en Provence. After his secondary studies he joined the Académie de la Grande Chaumière in the classes of Jacques Busse, Jean Aujame and Ozip Zadkine.

For many years he worked as a decorator on numerous films for cinema and television and at the same time pursued his activity as a painter and sculptor. In 1993 he exhibited a series of large drawings in graphite on wood at the Touchaleaume Gallery and moved to the South of France where he created and animated a painting and sculpture academy.

In 2000 he began to work on a sculpture of purely Africanist inspiration, which very quickly found its audience in the context of major events in Paris at the PAD, Brussels at the BRAFA, Antwerp, Geneva, Miami as part of ART BASEL. His works are part of numerous national and international private collections.

His naturalist style draws its inspiration from old photographic documents and obeys a permanent concern to seize in clay all these identity "details": headdress, jewels, scarifications... which will be then magnified by the bronze.

In addition to sculpture, he also creates luminous sculptures and design objects... 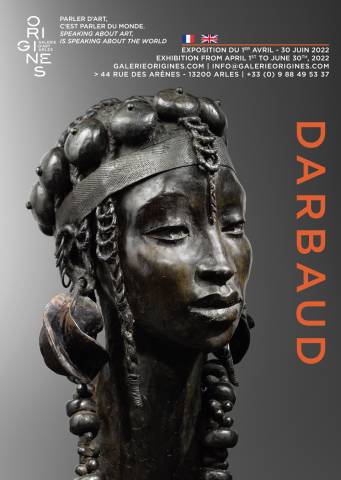 One year already since the Origins gallery opened its doors and presented its works from many prestigious collections and great dealers.

Many have come, and I thank them for that.
These emotions that we feel, this sharing, these discoveries, we can only thank their authors, often unknown but so present, sculptors of the imaginary...
I often dive into this immense library where the books of Art of Africa make me travel and understand that I am only a "passer-by": many of these works belong to the whole of humanity.
The choice of this second edition of "Afrique Émotions", from the Songyé Caryatid to the Teke chief's bracelet, is a journey of forms and colours which is offered to your eyes. 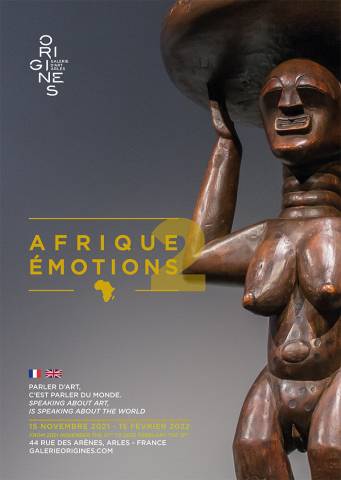 Bernard Palissy, an emblematic figure of his time, can be considered the father of ceramics with his live moulds and his rustic figulines. He died with his Secrets and still maintains the myth today. It was not until the end of the 19th century that "Palissy's followers" successfully tried their hand at the art of rustic figulines, reproducing in the footsteps of the Master, the abundantly aquatic dishes, the leaves with fish, frogs and other eels. Their names are Renoleau, Barbizet, ... they claim to be from the School of Tours, Paris or Angoulême. Will they manage to find the lost secrets of the Master? No one knows... 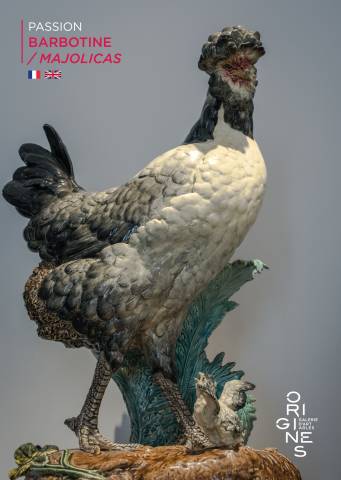 Of the great names that have marked Art Nouveau, there is one that has been inscribed in the very colour of the passion for its ceramics: that of Pierre-Adrien Dalpayrat. Dalpayrat red" is the result of Pierre-Adrien's mastery of stoneware. It is a shade that has made him internationally famous.

We are pleased to present to you today the pieces of our collection and in particular one of the masterpieces of the artist: a fountain with a putto, probably a Cupid, manifestation of his mastery and his genius of the colours, only specimen known to date (presented in pages 5 to 8). 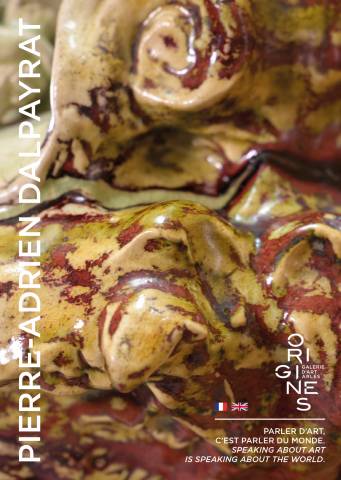 When we talk about the Ecole de Nancy, let us not forget names such as Louis Majorelle, Emile Gallé or Victor Prouvé, whose prestige makes them more discreet but no less rich and talented figures such as Ernest Bussière, first a sculptor, then a ceramist.

A master of Art Nouveau, Ernest Bussière was a man of his time, since he was born in 1863 in Moselle, shortly before the outbreak of the 1870 war. After the death of his father, Ernest and his mother had to make a choice: opt for France or stay in Moselle and become German citizens. His mother arrived with her 4 year old son in Nancy. Trained at the National School of Fine Arts in Nancy, he became a teacher there in 1905 and taught sculpture and modelling. 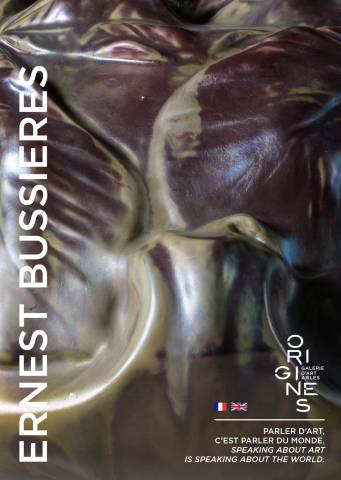 Baule, Dan, Fang, Bambara, Bidjogo, Mumuye, Kuyu... No less than 16 pieces, some of which are particularly remarkable, are given to you to appreciate so that, I hope, a dialogue is established between them and you, between you and yourself. Because yes, I think that these pieces have the power to question us, to inform us, perhaps even in our innermost being, about who we are, collectively and individually. 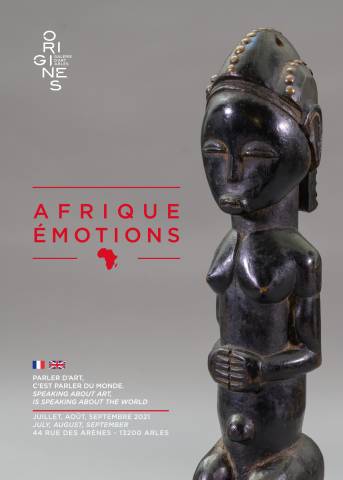 The spoons that I propose to show you in this exhibition are part of the extreme richness that Africa offers to our gaze and our understanding.

Often ritual, sometimes attesting to the high rank of its owner, they always demonstrate the richness of the imagination and the talent of its sculptor. As such, they are part of the great African sculpture in the same way as the statues and masks of the different ethnic groups.

I hope to give you as much pleasure as I had in discovering these pieces and to participate, as much as possible, in making the invisible visible. 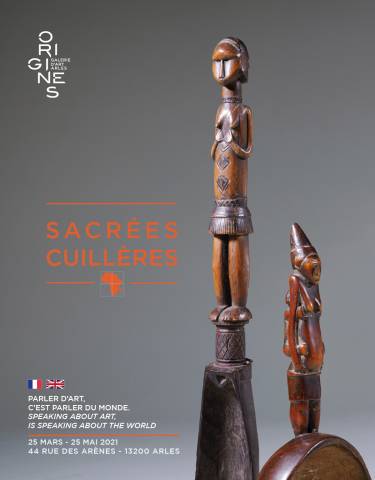