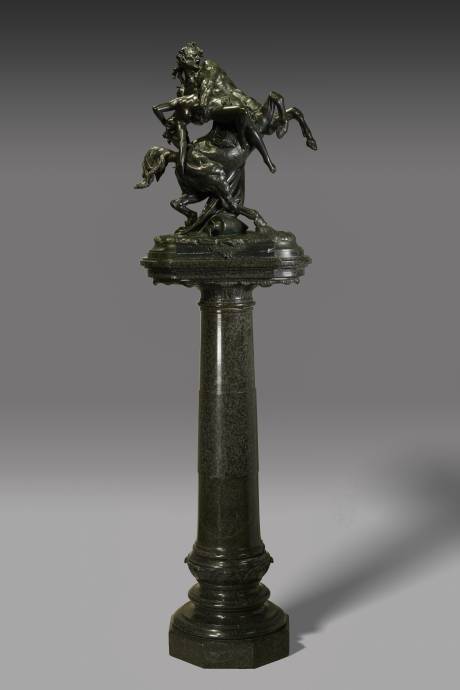 Exceptional bronze with original patina, nuanced green (slight erosion on the back of the horse), which preserves the authenticity of the work. On its green marble column. Made during the artist's lifetime around 1875.
Signed and titled "The Abduction" in a cartouche.

This scene is inspired by a passage from Ovid's Metamorphoses, in which the centaur Eurityon unsuccessfully tries to kidnap Hippodamia, the young wife of the Lapiths’ King, the peaceful people of Thessaly. It had previously been depicted by renowned painters like Rubens.

This sculpture is documented for the first time in 1871 through its terracotta version.

June Hargrove, demonstrated that the undulating body of the centaur with a daring musculature is characteristic of Rodin's models, suggests that Carrier-Belleuse's Abduction of Hippodamia may have been partly modeled by Auguste Rodin.

Indeed, from 1864 to 1871, Rodin worked in the Carrier-Belleuse workshop in Brussels and this model would have been designed at the end of his stay in Belgium. Indeed in the contrast between the voluptuousness of the naked female body and the hardness of the features of the centaur, we can distinguish the two approaches of the sculptors, the romanticism of Carrier-Belleuse, and the brute force of Rodin. The anatomical treatment of the main character is similar to the bruised men of the Titans' Vase. This bronze is part of the collections of the National Gallery in Washington, where it is presented with the possible participation of Auguste Rodin, then a student of Carrier-Belleuse.

The green marble column bearing this bronze accentuates the power of this melee and the violence of the momentum that carries this group, the centaur Pyloüs rearing up with ardor to kidnap Hippodamia, who resists him, this sculpture illustrating an episode taken from Ovid

Museums exhibiting (among others) works by Albert Ernest Carrier Belleuse